DISCOVERY OF HER RELICS 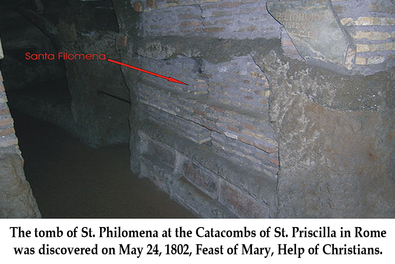 Little, indeed, is known historically of St. Philomena previous to her glorious martyrdom. Her real history commences when her blessed remains were found after having rested in obscurity of the Catacombs of St. Priscilla for fifteen hundred years. But God is wonderful in His saints, and St. Philomena strikingly exemplifies this oft-repeated truth. After allowing her name and memory to be buried with her earthly remains for centuries, He suddenly brought the attention of mankind to this little maiden martyr, and now works astounding prodigies in her name, as if wishing to show that He wills in this way to recompense the long time He allowed her to remain in obscurity.

According to a widely accepted account St. Philomena's relics were unearthed at the beginning of the 19th century. On May 24, 1802, during the excavations which are continually being made in the Roman Catacombs, an earthen tomb was brought to light. Three tiles, set together, closed the entrance, and on them was an inscription which seemed to be:

The letters were in red paint and surrounded with Christian symbols. After a little study, it was evident that these tiles had been disarranged, either because they were put in place in too great haste, or because someone not to familiar with Latin had to laid them in wrong order. For properly arranged, they read:

Pax tecum Filumena!
“Peace be with you, Philomena!”

The following day, when the stone slabs were removed, there was found within the burial place a thin, half-broken vase whose inner wall was covered with what appeared to be congeable blood. It was undoubtedly blood which had been collected at the death of the martyr, according to the custom of the Christians during the persecutions, and placed with the remains as a testimonial to her death by martyrdom. This blood was loosened from broken pieces of the vase to which it adhered, and was carefully placed in a crystal urn. Those present, among whom were men of great learning, were amazed to see that these little particles of blood, as soon as they fell into the urn, glittered like burnished gold or silver, or shone like diamonds and precious jewels, or, again, were resplendent in colors of the rainbow. This extraordinary phenomenon continues at  present day.

Another remarkable feature with regard to the blood is the fact that sometimes it takes the form of black earth. This appears to denote the unworthiness of those who are venerating it. One such instance was that of a priest who had lived unworthy of his sacred calling. When he kissed the reliquary, the blood became very dark. It took on its usual appearance at his departure.

INSIGNA ON THE TOMB OF THE SAINT 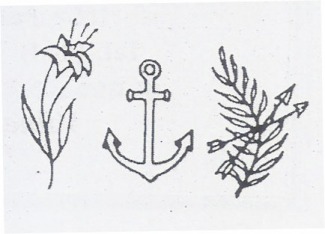 Cut on the tomb of the saint were emblems of a lily and a palm to indicate her virginity and her martyrdom, respectively. There were also an anchor, a scourge, and three arrows, two pointing in opposite directions, and one with a curved  line upon it, probably signifying fire and intended to symbolize the different torments that the martyr endured in testimony of her faith in and love of Jesus Christ.

The story of St. Philomena's life is based on private revelations made by the saint in 1883 to three different persons, in answer to the prayer of many of St. Philomena's clients to let them know who she was and ho she met martyrdom. Those favored persons were a young artist of good morals and a pious life, a zealous priest, and a devout nun of Naples, the Venerable Mother Mary Louisa of Jesus.

While the Holy See does not guarantee the authenticity of the purported revelations, the Holy Office gave its sanction to their dissemination on December 21, 1883. This means that the Church in no way condemns the story which may be accepted at its worth. But the supposed details are comparatively unimportant in the light of uncontested and positive miracles which prove that there is a saint who responds to the name of Philomena, and whose influence with Almighty God is very great. Hence, it seems more prudent to omit what may be uncertain and dwell at greater length on known facts.

EXHUMATION AND TRANSLATION OF HER HOLY REMAINS 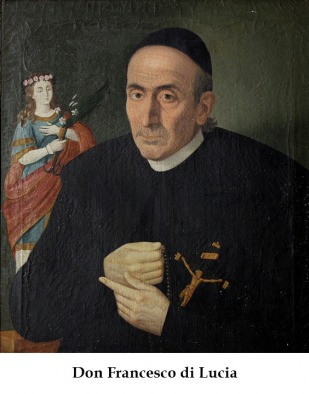 After the relics of the saint had been exhumed, they were left in Rome until 1805. At that time Don Francesco di Lucia of Mugnano, a small town near Naples, visited the Eternal City. He was filled with ardent desire of procuring the relics of some martyred saint for his private chapel. Since Bishop of Potenza, whom he had accompanied to Rome, supported his petition, Don Francesco di Lucia was allowed to visit the Treasury of Relics, a large hall where the exhumed remains of several saints were preserved. On pausing before the relics of the Saint Philomena, he was suddenly filled with an unaccountable spiritual joy, and at once begged for them. It was with some difficulty that the relics were finally consigned to him, since it was contrary to custom to bestow such treasures on a simple priest.  Through negotiations of a friend, the body of the other saint was at first given to him, which he accepted with reluctance. In the meantime, Don Francesco became very ill. He prayed to St. Philomena and was instantly cured. He renewed his attempts to procure her relics and, shortly after, the insurmountable difficulties to his possessing them were overcome, whereupon he had them taken to Naples. The travelers lodged in the house of a good friend in that city. There the relics were encased in a statue of the saint, specially made for the purpose, and this in turn was placed in a wooden casket. Soon many miracles took place. Lady Angela Rose, the mistress of the house, suffered twelve years from an incurable disease. She begged the saint's intercession and was instantly healed. Others, too, obtained wonderful cures.

TRANSFER OF HER RELICS TO MUGNANO, ITALY 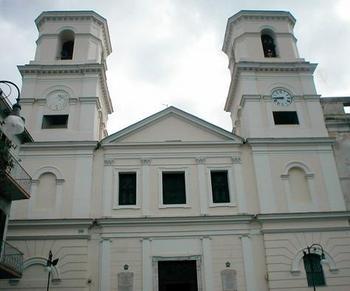 On the 10th of August 1805, the relics of the saint were transferred to Mugnano, a hill town near Naples and the home of Don Francesco. Continual miracles of every kind accompanied this transfer. The day before their arrival, at the prayers of the inhabitants, a plentiful rain refreshed the fields and meadows of Mugnano after a long season of drought. Lord Michael Ulpicella, a lawyer, who had not been able to leave his room for six weeks, had himself carried to the relics and returned home completely cured. A lady of rank had a cancerous ulcer on her hand which required an operation. A relic of the   saint   was brought to her.  In the evening, she  placed it  on  the wound. The following morning, when the surgeon arrived to operate, he found to his surprise that the wound had disappeared.

Saint Philomena’s shrine in Mugnano became the scene of the most marvelous prodigies, one of which was the cure of Pauline-Marie Jaricot. Known as the “Great Miracle of Mugnano,” this cure after a long and mature deliberation, led to formal approval of the cult of St. Philomena by Pope Gregory XVI who declared it a first-class miracle. The Pope, in his decree, called the saint “The Thaumaturga (Wonder-worker) of the Nineteenth Century.”This title, as thousands attest, she deserves no less in our day, for her miracles are as numerous and as brilliant ever.